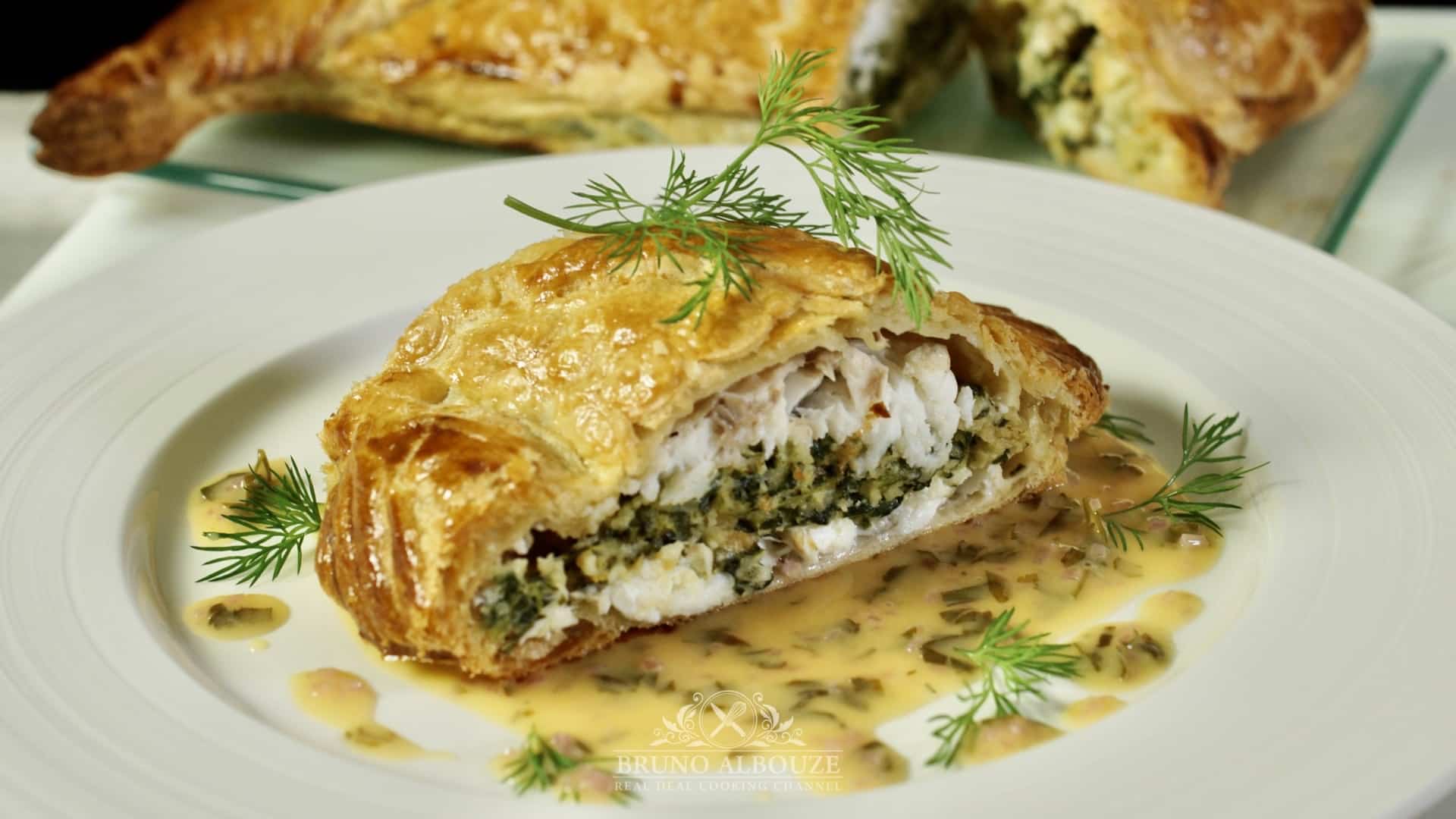 The Loup en croûte is a famous French dish that was introduced in the seventies from Paul Bocuse, Michelin starred restaurant at L’Auberge Du Pont de Collonges near Lyon, France. A dish consisting of a whole cleaned and skinned sea bass (bar) stuffed with a vegetable and dairy based filling or other scallops mousse and then wrapped in puff pastry and baked. The crusted fish is then brought at the client’s table. It is meticulously cut and boned and paired with a sauce aux herbs (herbed butter sauce) – an elegant and impressive French classic which remains in the menu today!. To adapt this dish to home cooks though, the fish is rather turned into filets, boned and reconstituted before being wrapped in pastry. Whatever methods is preferred, the stuffing is there to create moisture that won’t escape during baking thanks to the puff pastry so the flesh of the fish wont dry out.

To make inverted puff pastry from scratch, look up at Inverted Puff Pastry. If using store-bought puff pastry, thaw it in the refrigerator overnight. In a floured work surface roll out pastry into two 0.15’’/4mm thick and 16’’x7’’/40x18cm sheets. Cut out a few ovals for the extra fins and a couple of strips for the neck. Chill. Save scraps for later use.

Remove stems and wash spinach thoroughly and spin-dry. In a hot pot or dutch oven, add olive oil and stir in the crushed garlic. Throw in spinach and cook stirring swiftly for a minute or so on high heat. Season with salt and pepper and cover and cook for another 2 minutes; on low heat. Transfer cooked spinach over a few layers of paper towels to drain. Let cool completely, and discard garlic. Using more paper towels, squeeze out the remaining juice left in spinach and chop. Mix together spinach, cottage cheese, egg and lemon confit. Add more salt and pepper if needed. Keep the spinach mixture refrigerated.

In a small skillet or saucepan, reduce to dry vinegar, wine, shallots, a bay leaf and some thyme. Add water and stir in the softened butter along with the fresh herbs and lemon confit. Bring to a boil and season to taste. Discard bay leaf and thyme. Serve warm the same day.

What you need: Puff pastry sheets and extra cuts, chilled. *Fish filets (Loup de mer, Bar, Branzino), boned and skinned, fish head and tail, chilled. Extra virgin olive oil, fleur de sel and ground black pepper to season the filets. Spinach stuffing, chilled. Egg wash: beat an egg with a pinch of salt; set aside. Fresh dill for garnishing. Lay out the first pastry sheet onto a baking tray lined with a silicone mat or parchment. Place the first filet in the center (skin side down or where the skin was). Season with olive oil, fleur de sel and black ground pepper. Rebuild the fish adding its head back and tail. Add stuffing to cover the filet and the head cavity. Cover with the second filet and season. Egg wash all around the side of the stuffed fish along with the tail and head. Top with the second pastry sheet and seal well; removing air pockets as you go. Since puff pastry does not like heat, try to keep everything cool. With a pairing knife and a pizza cuter, carefully remove excess dough following the shape of the reconstituted fish leaving extra dough though on both sides for the fins. Egg wash the pastry. Carve the tail and fins using the back of a paring knife. Using a large plain pastry tip, design half moon marks on the fish body to resemble the scales. Add a strip of dough around the neck and make extra fins using the oval dough cuts to thicken the tail. Add a dorsal fin as well. Let rest in the refrigerator a couple of hours prior baking.

In a preheated conventional oven, bake the loup en croûte at 400ºF/200ºC for about 40 min. Serve hot with the warm herbed sauce. Bon appétit!