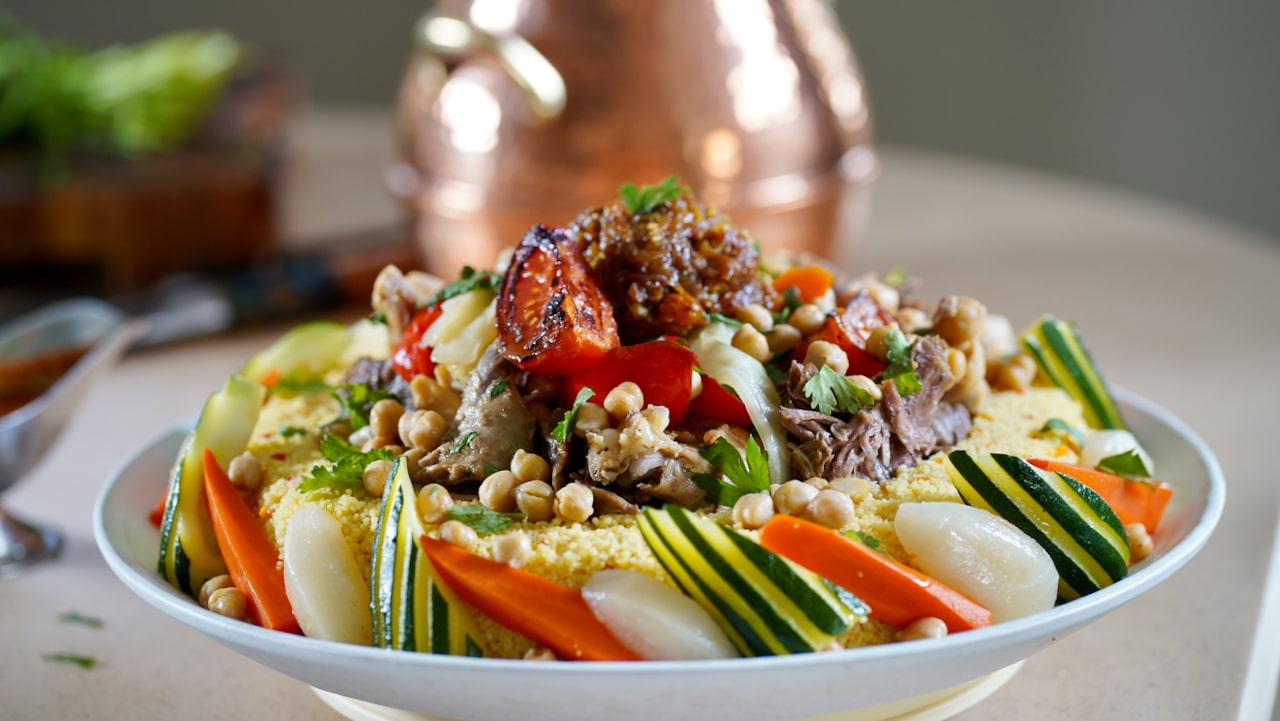 Couscous is a North African dish of steamed durum wheat semolina that is traditionally paired with a stew spooned on top. Note that couscous was originally prepared with millet and not wheat. Usually served on Friday, but also offered during baptisms and wedding celebrations. The Tunisian couscous is rather based on fish. In Moroccan homes, making couscous is an expression of love, generosity, and hospitality. Moroccan couscous uses the finest wheat semolina that is traditionally steamed in a couscous steamer (couscoussier). Most couscous recipes though call for pretty much the same vegetables and spices which are carrot, turnip, parsnip, cabbage, squashes, pumpkin, tomatoes, and peppers. Spices are cinnamon, saffron, ginger, Ras El Hanout and Harissa. As lamb goes well with a hint of sweetness, dates, raisins, onion marmalade called tfaya are often added to the dish. Couscous Royal though, is served with grilled meat such as brochettes, lamb chops, and merguez. To make everyone agree, it would be fair to say that couscous is a Maghrebian specialty. Couscous became a staple in France too!. In fact, each summer and during family gathering, there is always a couscous party on its way!.. 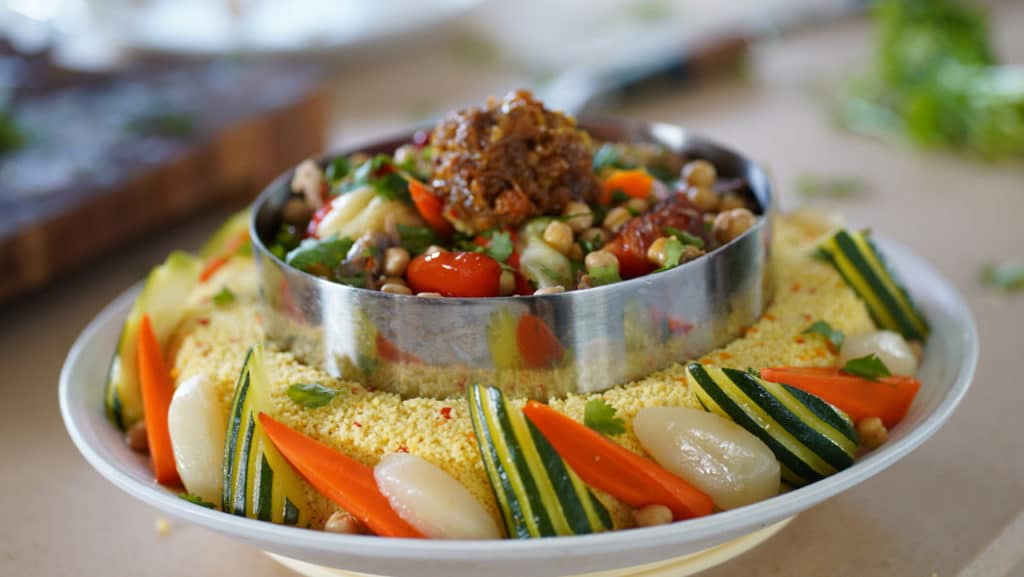 When it comes to stew and braising, the liquid in which meat is going to be slow cooked, should be the center of attention. Indeed, in French cuisine taste comes first – therefore couscous is no exception. Using a robust homemade chicken stock rather than water makes a huge difference. Chicken can actually be seared with a dash of oil in the pot first prior to star the bouillon.
Cut lamb shoulder or neck into 8 ounces/250g portions. Avoid small cuts as it shrinks during cooking time. Some excess fat can be removed but no worries, it melts away during simmering. Quarter tomatoes, remove the seeds if desired and chop (save seeds for your next salad). In a large pot, add the lamb, the chilled chicken stock, remaining ingredients and vegetable scraps (discard turnip skin). To flavor it up even further, a couple of bouillon cubes can be thrown into the pot – Do not add the chicken yet. Bring to boil and cook lamb on low heat for 90 minutes. Skim off the scum and fat that accumulates on the surface of the bouillon every so often. Since lamb fat is rather strong, most of it shall be removed. After 90 minutes, add chicken and cook for 45 minutes, half way through, add carrots. Carefully, remove chicken and lamb from the pot and arrange onto a large baking tray. Remove and discard chicken skin and scraps. Pass bouillon through a sieve and continue to cook bouillon on low heat to concentrate flavors. Use your couscoussier for the next step or other use another device such as a stainless colander and a large pot.

Peel, rinse, trim and cut carrot into 3 inch/7.5cm sticks. Split in half lengthwise the thickest part of the carrots, and leave the thiner parts whole. Peel off turnip with a paring knife; remove skin and the first layer as is got strong aromas. Cut turnips into 4 or 6 wedges. Tourner turnips for a fancier finish if desired. For the bell pepper, wash, core, and cut into 4 portions. Cut each in 2, get rid membranes and seeds. Cut cabbage in 8 (use half), leave some of the core intact, otherwise it will separate during cooking.
When it comes to vegetables, traditional couscous is rather served with well done veggies. However, they often end up too mushy. For better handling and presentation and without compromising taste, vegetables should be cooked accordingly. For instance, carrots should be cooked in the bouillon for about 20 minutes, cabbage, zucchinis, turnips, and pepper for about 15 minutes. Keep meat and vegetables separated. Reheat in the bouillon prior to serve. 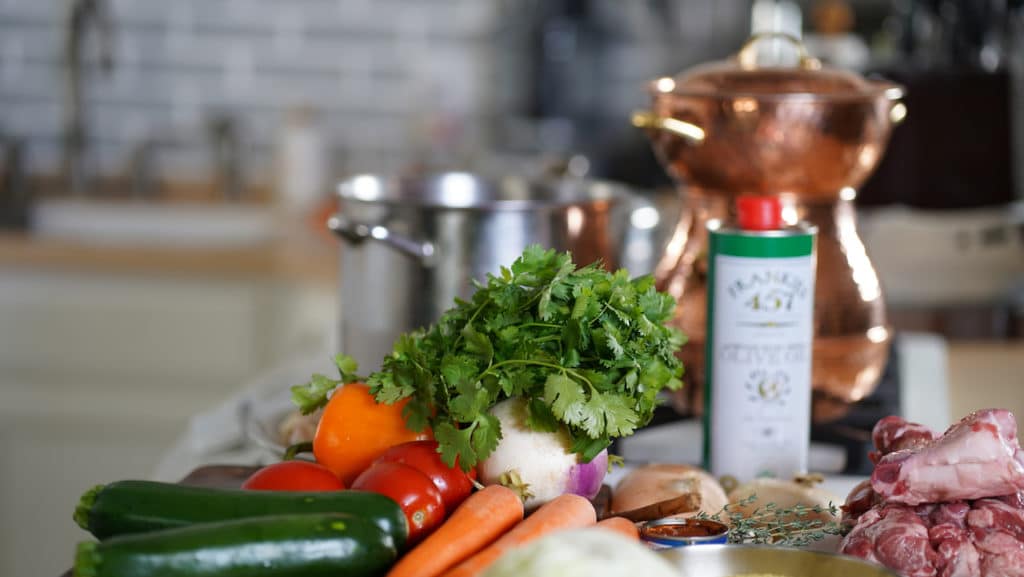 Peel and slice out onions thinly. In a medium size saucepan, add all ingredients and cook on low heat for about an hour or until it begins to caramelize. Taste and readjust seasoning – Keep warm. 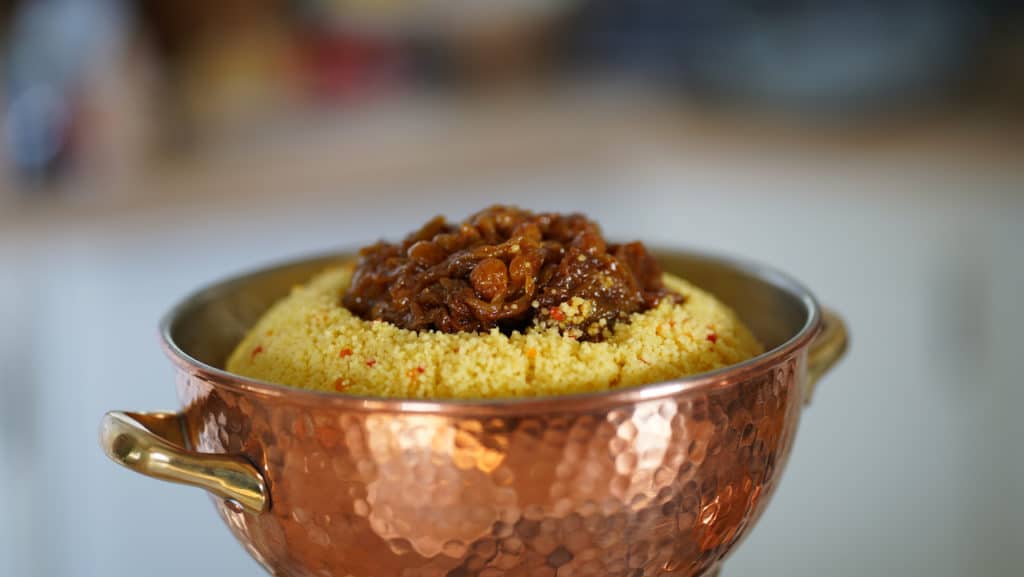 Purists would prepare couscous using a laborious steaming process. However, this method I learned from a Moroccan chef, offers excellent results without the hassle. First, rub dry couscous with the olive oil. Bring to a boil chicken stock or water with salt and turmeric or saffron. Pour in couscous and stir up with a fork. Cover and let set for 4 minutes. Fluff with the fork and spread couscous over a large platter or tray. Scoop the couscous into your palm and rub your hands together. Rubbing the couscous between your palms separates the couscous from clumping. Mix in bell pepper brunoise if desired. Transfer couscous to the couscoussier bowl and place on top the simmering bouillon for 20 minutes when cooking veggies (do not cover). Remove couscous from the steam and repeat the rubbing step once. Put couscous back to the steamer bowl; uncovered and when reheating meat, veggies, and chickpeas as indicated bellow. 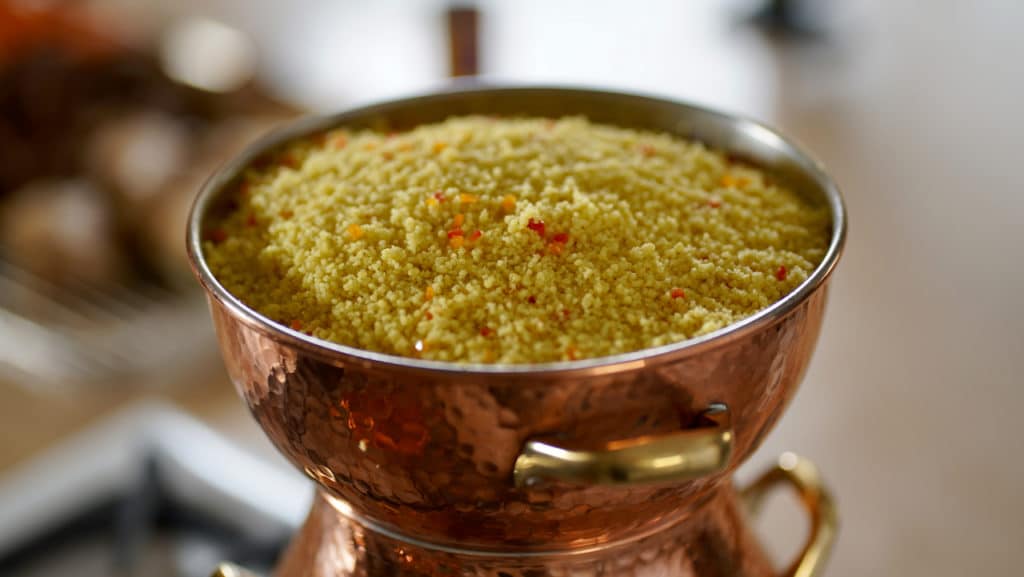 Make the hot sauce by mixing harissa and stock. Add more less heat according to taste. Pan sear tomato wedges with olive oil with salt and pepper. Meanwhile, put meat back in bouillon with chickpeas, and let simmer for 15 minutes; top with couscous allowing to steam again; uncovered. After 15 minutes, reheat veggies for 3 minutes. On a large platter, arrange couscous, meat and veggies the way you like. Cut in half carrots and zucchini if desired, and add garnishing. Serve with the hot bouillon, the spiced-onion marmalade and the hot sauce. Some toasted pine nuts can be thrown in the dish too – Enjoy! 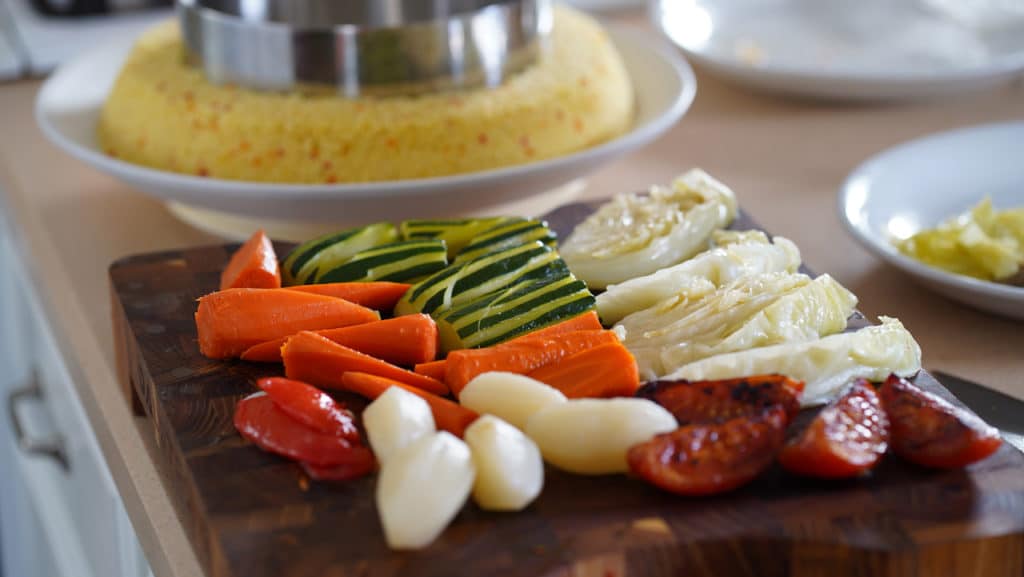 Couscous can be plated out as well 🌞 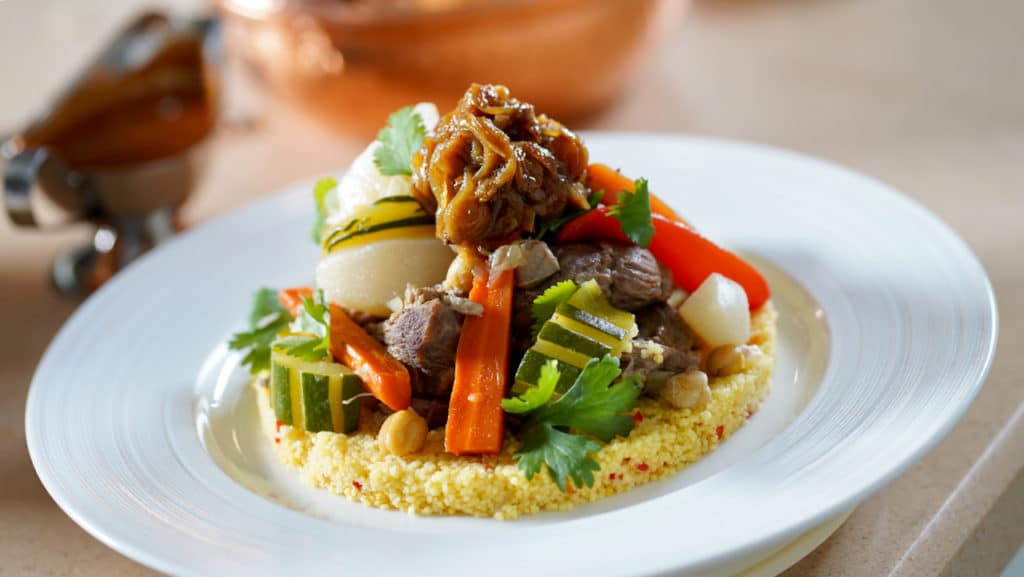